I may have alluded to this before, but my husband and I have a thing for the Middle East. We certainly don't think that Arab or Persian culture is in some way superior to all others. It just so happens that we both have traveled to Arab nations and loved it, and that the majority of our international friends are either Arab or Persian. Our friends have a way of rubbing off on us and often we can't get enough of it. I feel like our Middle Eastern friends are usually the ones that are most open and emphatic in sharing their life experiences, ideas, and culture with us. Perhaps this comes from a great pride in their culture, but I also get the impression that discussing such things is engrained in their culture.

So we steal from their culture from time to time and work it into our own. Some nights we say, "screw Lipton, we want Iranian tea!" or "Gravy on rice? I think a yogurt would go better!" Sometimes we just miss being overseas, and on those nights we prep the hookah, sit outside with friends, play a little Nancy on the radio and transport ourselves to another place.

A hookah is a water pipe used for smoking loose leaf tobacco, most often flavored with apple, cherry, or strawberry (etc.). The pipe orginates from India, but is most commonly used today in the Middle East.
﻿﻿﻿﻿


﻿﻿﻿Pictured above is our hookah. John bought it from a friend he made while living in Jordan one summer. His friend owned a hookah shop and gave him a great deal on it. We treasure it. It's so beautiful in design and not like the cheap and tacky pipes you might find at your local smoke shop. John and I often talk about going into business with him to import Jordanian and Syrian hookahs for sale in the U.S. Maybe one day...

If you're in the market for one, be sure to put in a little extra for it. It is worth the price to get one that has been imported and hand-painted. Not only for conversation purposes, but in the name of design! So go out and get one. Got it? Ok, now let me show you how to use it in 10 steps...

1. Fill the base with water to cover the iron rod that goes into it by 1-2 inches. Throw a couple ice cubes in there as well, it helps cool down the smoke and I've heard it enhances the flavor.

2. Pull a little bunch of tobacco from the pack and press it between two paper towels to dry it out a bit.

3. Put the hookah back together and remove the cup at the top. Loosely fill it with the flavored tobacco of your choice. (see below) 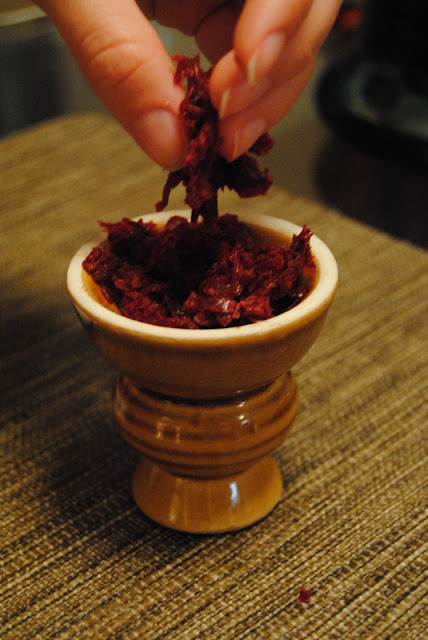 4. Cut a square of foil and fasten it around the top of the cup. Be careful not to pack in the tobacco. Then use a sewing needle, toothpick, or if you were desperate like us, a knife, to poke small holes on the top of the foil. (see below) 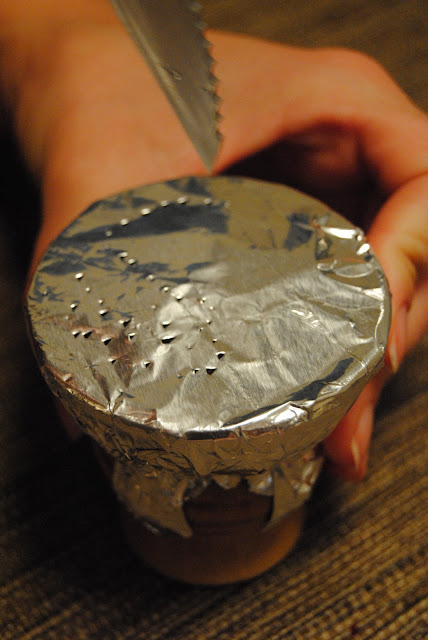 5. The next part deals with fire and starts the smoke process. Hookah doesn't leave a strong smell in the house like cigarettes or cigars do, but if you would rather move things outside, now is the time to do so. At the smoke shop the sell quick heating coals for hookahs. You'll need one of these, some tongs and a lighter.... 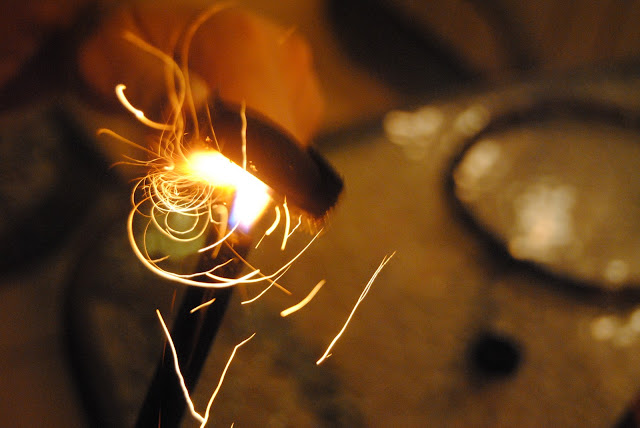 7. Once it has been thoroughly heated, blow on it to allow the heat to permeate the coal until it glows red. 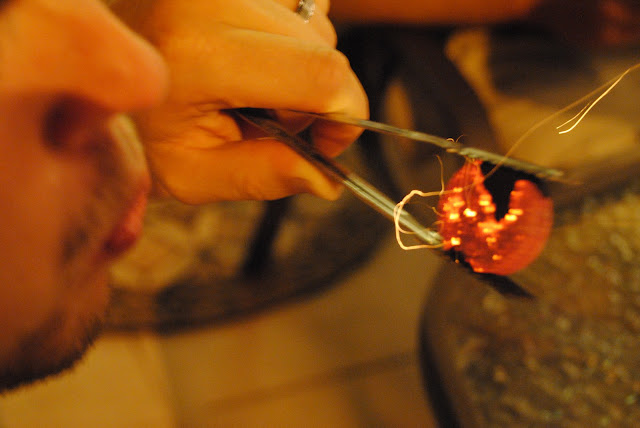 8. Place the now gray coal on top of the foil and let it sit for a few minutes. Throughout the evening you may need to shake off the coal in the plate of the hookah to prevent inhaling ash. If the coal starts to crumble get a new coal and start the process over. 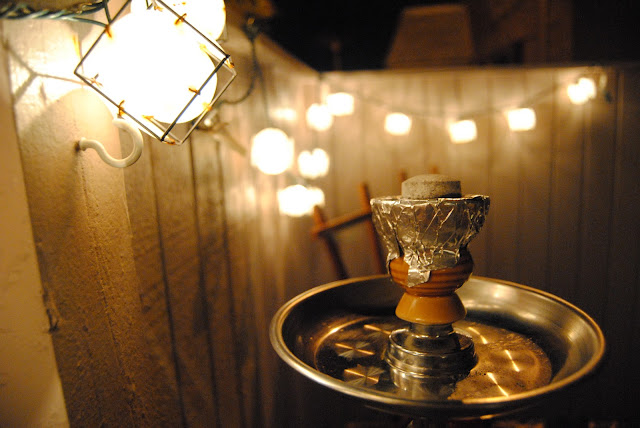 9. After 5 minutes, inhale through the pipe and see if you are able to produce smoke yet. If not, let it sit a little longer before trying again. 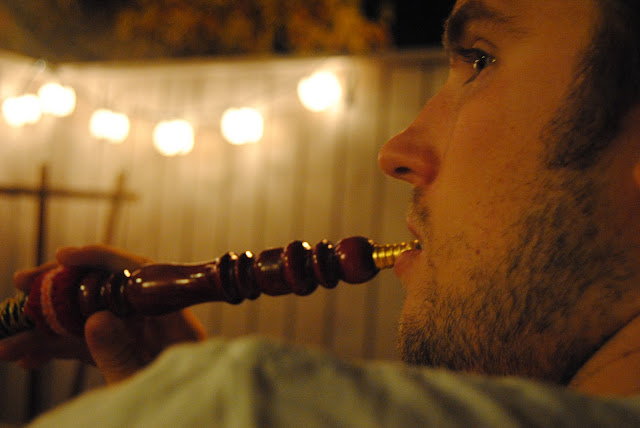 10. When it is ready, smoke till you heart is content and you have exasperated all avenues of interesting conversation.  Smoke tricks may also be employed to entertain the company. See Nate below... 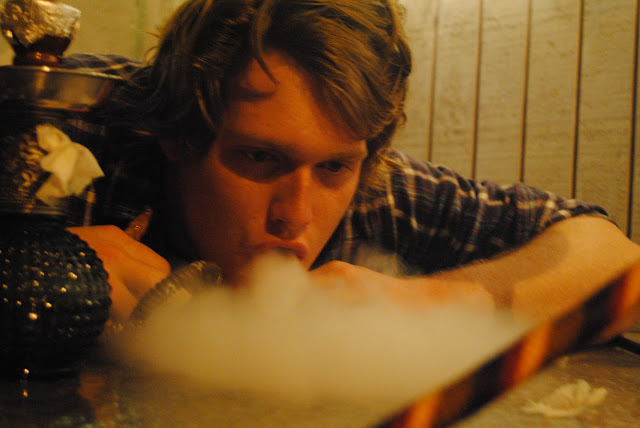 As I mentioned previously, hookah is a big part of Middle Eastern culture. In some areas smoking is only for men. In others it can be done among and with mixed company. It's a great time to sit together for hours on end and chat. The tobacco burns slowly, so there's plenty of time to relax and waste time with good friends. Hookahs come in many sizes, and you can also buy attachments to add multiple hoses. I happen to like just using one, it adds a sense of community.

Etiquette varies by country when it comes to whether or not it is acceptable to smoke in public. Jordan has a hookah place on every corner, whereas in Morocco they are rarely found. Etiquette in passing the hose also can vary by country. In some places it is acceptable to pass the hose with the mouthpiece up. In others it is appropriate to fold the hose so the mouthpiece is facing back toward you and pass it that way. In keeping with every cultural "rule of thumb" I've ever mentioned...just copy whatever the nationals are doing. : )

Have you ever smoked hookah? Do you enjoy tradition that surrounds it?
Posted by Hannah {Culture Connoisseur} at 11:09 AM