John and I honeymooned in Spain and Morocco last October and while spending a five day stretch in Malaga, Spain we took a day trip to Ronda. We made it to the bus station just as the sun was rising, with a 3 hour ride ahead of us. The first hour and a half were quiet dull, passing through a number of coastal towns known as tourist spots we realized we were right not to buy into the claims that a beach-side vacation was a must. While the ocean was breath-taking, the towns were dull and lifeless - nothing like the buzzing city of Malaga in which we stayed.

As we turned away from the coast and headed up into the mountains the scenery began to change. The huge tour bus swayed back and forth through the hairpin turns and suddenly John and I found our noses pressed to the windows. We lost all composure. After being presented with beauty after beauty were were presented with what we found to be the crown jewel of Andalusia....Ronda.

There's not enough room in the world (or my heart) to contain the beauty of this city. In the brief 8 hours I spent there my emotions were overflowing. The old Spanish town of Ronda is one of the most rustic and beautiful towns I've ever seen. Roaming its streets and hiking its gorge, I couldn't believe that the people of Ronda live there. They wake up in the morning, walk out on their patio, and see all of this. I felt so blessed to see its beauty for just one day,  and couldn't  imagine a lifetime engulfed in it!

The streets were bustling in their own little small-town way and though the residents are no doubt bogged down my the number of tourists clogging their walkways, you can tell they are proud of their city and happy to show it off. The people in Ronda were even more laid back than those in Malaga (if that's even possible) and quite friendly.

Upon arrival we got a bite to eat and then headed over to the Casa del Rey Moro.The house was recently visited by First Lady Obama and I knew there was access through the house to the bottom of the gorge. Those two facts sold me. After spending more euros than we would have liked, we had free reign over the old home. It was built in the 18th century and bits of it were falling to pieces.

The house and old staircase down the gorge had a lot of old world charm and beautiful overlooks of the city. It wasn't until later that we realized there was a much more spectacular way to get to the bottom of the gorge, free of charge.

If you love old architecture, finding fun hiding places, and a bit of mystery to stir your imagination, the casa is for you. But if you're looking to save your euros, you could visit Ronda without a tour of the place and still see everything there is to see.

Waltzing around the city we encountered numerous squares covered in vines and flowers. Locals gathered playing guitar and selling this or that. Out of the corner of our eye we noticed what looked like a group of young Scottish boy scouts gathering to walk off a cliff. Afraid they knew something we didn't, we went to inspect and found an old trail that led to the bottom of the gorge just below the Puente Nuevo. And we so began our journey down... 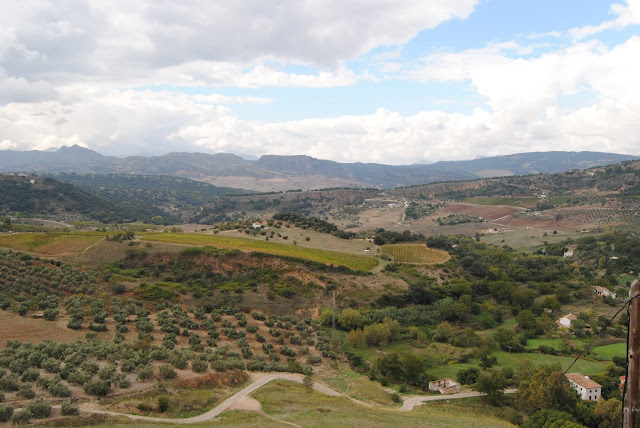 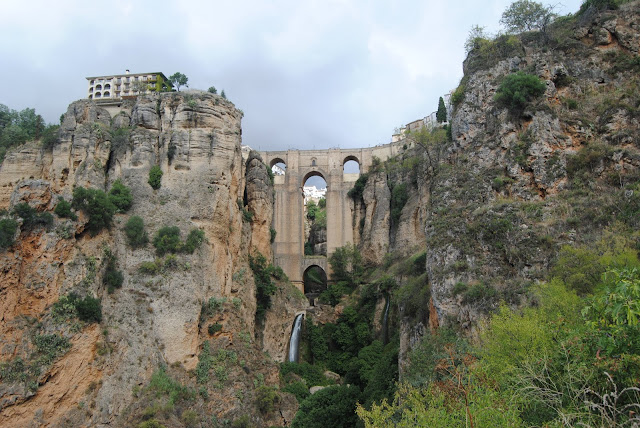 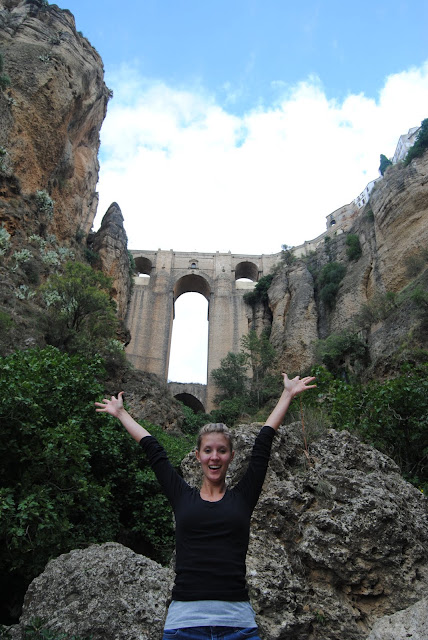 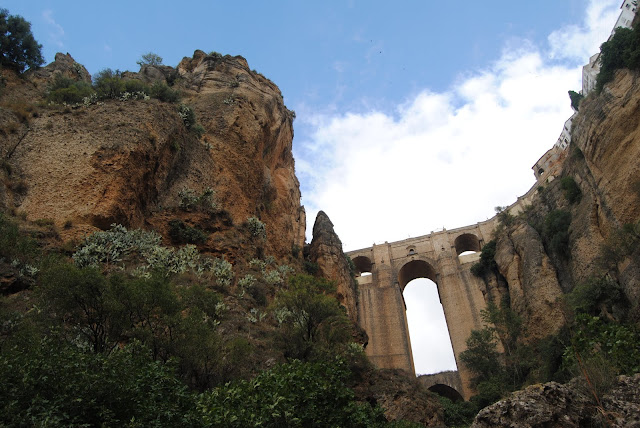 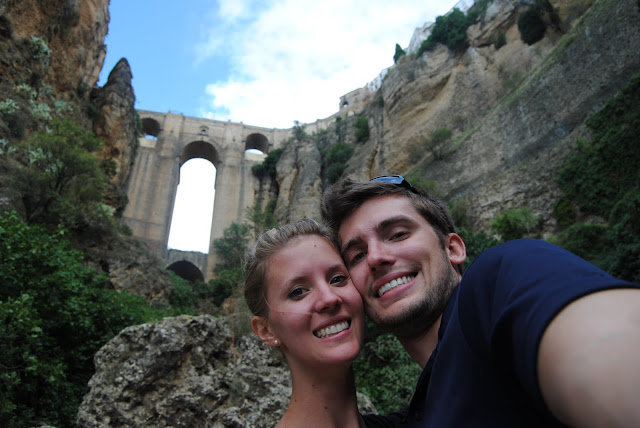 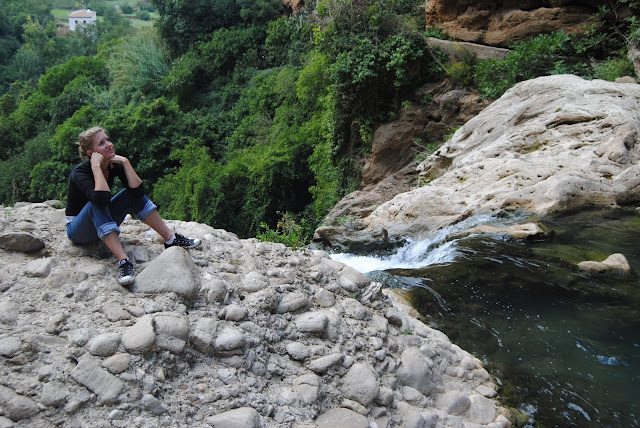 When we made it to the bottom of the gorge we were the only folks there. We started out with others but mud and a bit of rock climbing acted as a deterrent. There we were- two young people in love-surrounded by the grandeur of mother nature. John laid on a rock and I sat like this, silent, for what felt like hours. If I had the time and an ample amount of food you could still find me there, staring. Places like this stir my soul. When I inhale, I breath in the rushing water. And when I exhale, I send out all the things that weigh me down...when you're surrounded by the gorge all the worries and fears you used to know don't matter any more. All that matters is the beauty around you, and the joy of sharing it with your very best friend.
Posted by Hannah {Culture Connoisseur} at 9:21 AM