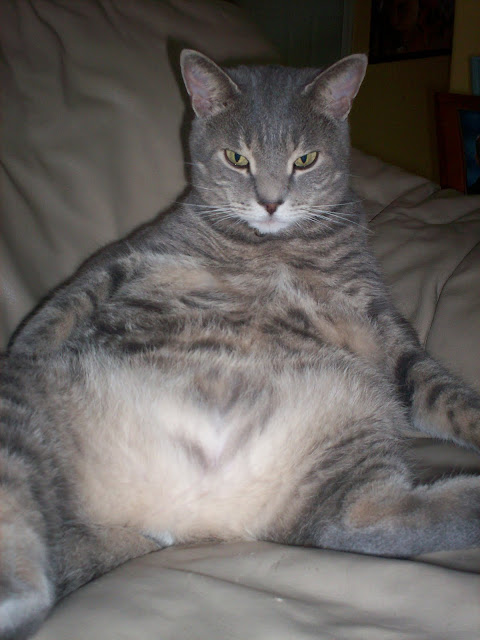 Meet Gree (a.k.a "Greezers," "Greester," "Greasy Gree," or "The Greezy-Wheezy"). He was my most beloved fat cat for six years. He was an awesome cat that suffered compulsive eating disorders and bi-polar disorder...I loved him dearly.

Gree was the kind of fat cat that would lay down to eat. You knew he was heading for his food bowl by the sound of his furry fat rolls dragging along the tile floors of the kitchen. He provided us endless entertainment, and watching him trying to squeeze, slowly but surely, through the cat door made for side-splitting fun. I'm pretty sure his hunger mechanism was broken because he always scarfed his food, even if he had been fed just one hour earlier. Bless his little heart...

As I said, he suffered a severe psychological disorder known as bi-polar disorder. My dear cat would become entangled in my arms, snug as a bug in a rug, one minute...and try to tear off my finger with his fangs the next. For some reason, no one else in my family ever learned to appreciate this unique trait. I loved his unpredictability.  I loved that we could go from a sweet nap on the couch to an all out brawl on the living room floor in a matter of minutes.

I guess you could say there was some co-dependence going on on my part. But you know, those sweet times made the abusive times fade away. He may have been ill-tempered, but he really loved me, ya know?

Our relationship ended, quite abruptly, four years ago while I was away at college and my mother gave him away without asking me. It was a sad year for me. I felt as though it was the end of an era. Some nights I wake up fighting for breath, imagining that just like the old days, Gree had perched his fat body on top of my chest and was watching me sleep as I struggled under his weight.