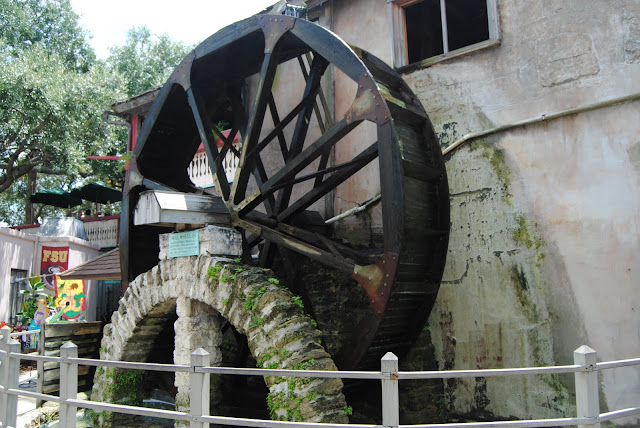 St. Augustine is a must-see if you ever visit Florida. While we have many beautiful things to see in do in my great state, none are as full of history as St. Augustine. The city was founded in 1565 by Spanish explorers and is the oldest continuously occupied European-founded city in the United States.

I've been to the city a number of times as I had originally planned on completing my bachelor's degree at Flagler College in St. Augustine. Though accepted, God had other plans and re-routed me to Orlando instead. Now when I visit, it's as a tourist- there to take some lovely pictures and enjoy it's delicious food! 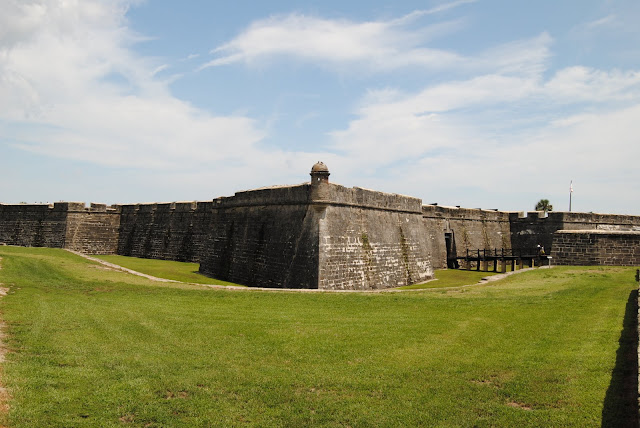 One of the most historical aspects of the St. Augustine landscape is the huge fort built by Spanish colonialists called the Castillo de San Marcos. It was built in 1652 to protect against invaders when St. Augustine was still ruled under the Spanish flag. The British fought for the land, winning, eventually giving it over to the Spanish again in 1783 for their efforts in establishing the area. It wasn't long until, in 1819, St. Augustine was officially given over to the U.S. For a fee, you can go explore around the old fort and imagine what it must have been like to be the first people to colonize in the state of Florida. They say the explorer Pedro Menendez de Aviles was in search of the Fountain of Youth. 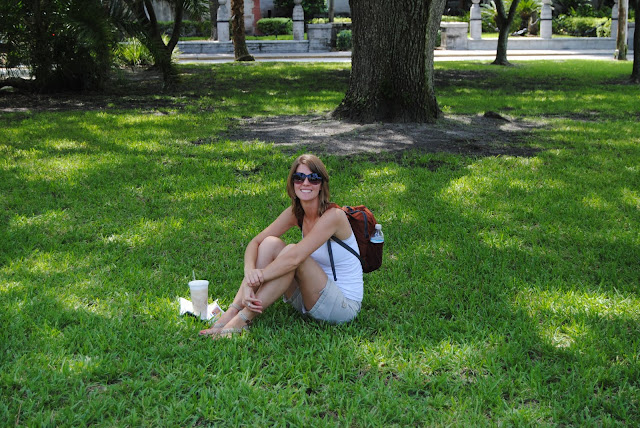 The old downtown area of colonial St. Augustine is quite small, but has tons to see in do in the small area it covers. The city surrounds a main center of breezy, oak-covered gardens. It's a lovely place to sit down and find rest in the hottest parts of the day. Each section of the garden is complete with an old fountain to cool down in and plenty of flora and fauna indigenous to our tropical area. I recommend you go on a weekend to find tons of young college students out selling homemade knick-knacks, hand soaps, hemp jewelry, and local art in the gardens. 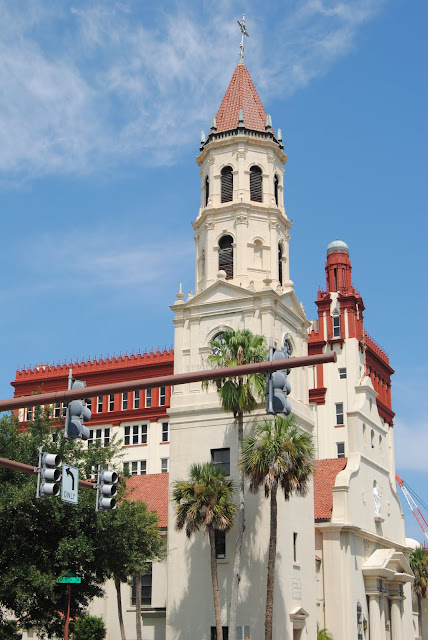 One of the things I love most about St. Augustine is the architecture. Each building is, of course, heavily influenced by Spanish culture and design. When we had the chance to travel around Spain I saw many commonalities between St. Augustine and the cities abroad. But St. Augustine definitely has its own flair and feel. The hot air of the Florida beach hits you like a brick wall, and the sounds of the city remind you that you've not stepped too far out of America and get the feeling that though the Spanish established their culture in the new land, it was not without a little innovation to set it apart from home. 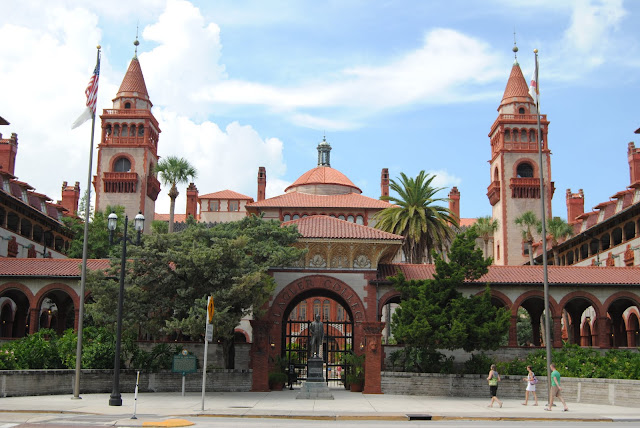 Flagler College was originally built as the Ponce de Leon Hotel. It was built but millionaire Henry Flagler in 1887 and was state of the art for it's time. The design of it's buildings are breath-taking and I've yet to see anything else like it in the states. Believe it or not, Thomas Edison himself wired the electricity for the old hotel and the whole place oozes with history. If you're like me, your imagination gets the best of you in buildings like this. I walk up and down the regal halls or stare up at the painted ceilings and wonder what it must have been like to be so privileged in the early 1900's as to stay here for weekend. 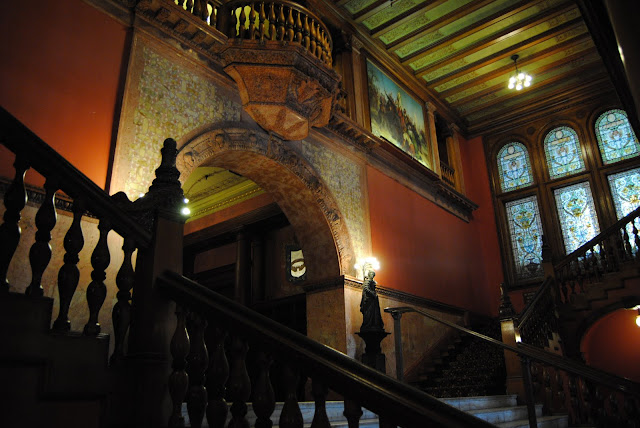 Now, for just under 20K a year you can walk it's regal hallways daily...as college student.  In 1968 the hotel was converted to an institution of higher learning as a private liberal arts college known for its business school and its quality Deaf Studies program.  Walking around campus it is unbelieveable to me that students study and eat their meals in rooms that were designed for decadent galas and 5-star meals. But, I suppose they pay the price for it. Surely "Sallie Mae" is a cursed word in those parts. 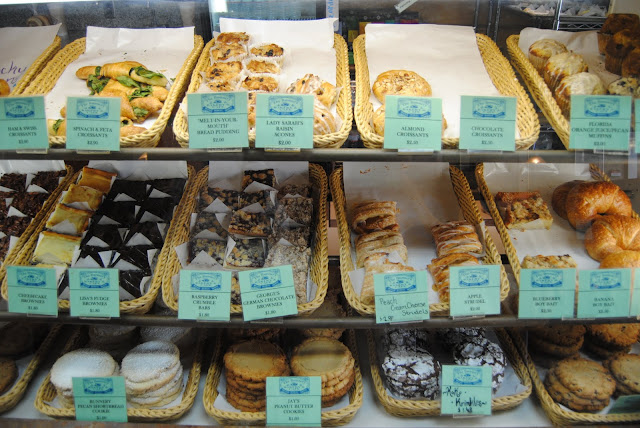 I can't wrap up any "city feature" without speaking of the local eats, of course! If you love local bakeries and mom and pop eateries this city will be your heaven. I'll recommend a couple of my favorites:

The Bunnery:  (Off of St. George St. and pictured above.) This place serves up some seriously awesome baked goodies and has a lunch menu to die for. I always be sure to check out this place for lunch when I am there visiting. Their homemade soups and chicken salad are heaven, and I tried a cool shrimp salad last time that absolutely knocked my socks off.

Harry's Seafood Bar and Grille: (Located off of Avenida Menendez) This restaurant is one of five in the state of Florida. They serve up New Orleans-style seafood and cajun favorites. The restaurant has a great outdoor seating area and overlooks the port of St. Augustine with a great view of the old Spanish bridge that crosses the Indian River.

Cafe Del Hildago: (Off Hypolita St.) There are no words for this place. They serve some of the best gelato I have ever eaten; and that's from someone who has tried gelato all over Europe, people! This cafe has a wonderful atmosphere and a sincere staff. We enjoyed trying all kinds of gelato and though we didn't try their lunch or dinner, the menu looked top notch. This is a great place to cool off mid-day.


Have you ever been to St. Augustine? What were you favorite places to go?

Posted by Hannah {Culture Connoisseur} at 9:44 AM