If You Can't Write It, Steal It.

In her effort to console me in my last post, Lauren from Outside Voice sent me one of the best articles I've read in a long time from an advice column at therumpus.net. It was entitled Write Like a Motherf***ker. I'm indebted to Lauren now, as this website has absolutely changed my life, and gotten me through what seemed like endless hours of work time. It's as if the articles are written just for me, in precisely my type of humor. It's perfection on the page, and since I'm sucking so badly as a writer these days I thought, "why not steal someone else's writing?" Here's an essay from my favorite writer on the site, Ted Wilson, that was posted April 25, 2011 on Ted Wilson Reviews the World. 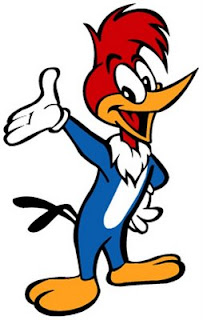 Hello, and welcome to my week-by-week review of everything in the world. Today I am reviewing Woody Woodpecker.
Woody Woodpecker was a cartoon woodpecker from the mid 1900s. He had the most annoying laugh. It reeked of insecurity, like he was yearning for someone to laugh along with him. And boy was he annoying. No one seemed to like him. No one. He was just a jerk all the time.
I haven’t seen him in a long time, so I think he must be dead. If he died the way most woodpeckers in real life die, which is by becoming old and brain damaged from all the repeated pounding of one’s head into a tree, then I imagine Woody’s would have been a sad death.
Muhammad Ali suffers a similar fate, but he can get by okay because he is charming and people like him. No one ever cared for Woody, so his death would have been lonely. Painfully, painfully lonely. I doubt he would have had much reason to laugh as he slowly withered.
Or, he might still be alive. Who knows for sure? He’s a cartoon after all, so even if he died, he could very easily come back to life. I wish my wife had been a cartoon.
The closest Woody has come to being real might have been the time one of the neighborhood kids dressed up as Woody for Halloween. I couldn’t believe anyone would purposely choose to embody such an unlikeable personality. I refused to give him any candy until he went home and changed his costume into someone more appealing, like Jack Palance. Instead, and in predictable Woody fashion, he had to be a jerk about things and stomped all over my flower bed with his giant yellow feet. So predictable. No wonder he died alone.
Woody did have a cameo in Who Framed Roger Rabbit, so I guess someone somewhere must have liked him. Or at least felt enough pity for him to give him a bit part.
Posted by Hannah {Culture Connoisseur} at 9:06 AM