Hello, connoisseurs! Today is a day I've been looking forward to for some time now. The chance to finally share the pictures and experiences so close to my heart from our honeymoon to Spain and Morocco. Fez is a magical city, and you can't help being drawn in by it! Fez is the cultural capital of Morocco and consists of miles and miles of alleys burrowing through the bustling medina enclosed by huge walls and accessible only through any of the twelve city gates. No cars are allowed in this city, only pedestrians and donkey carts.

It has been said that to walk every alley of the city would take all of three months to do. They vary from broad to almost impossible to walk through...and one is left to wonder how these buidlings were even build up so close to one another. You look above you to see two buildings leaning on one another and wonder if their ancient stone might crumble on top of you at any moment. 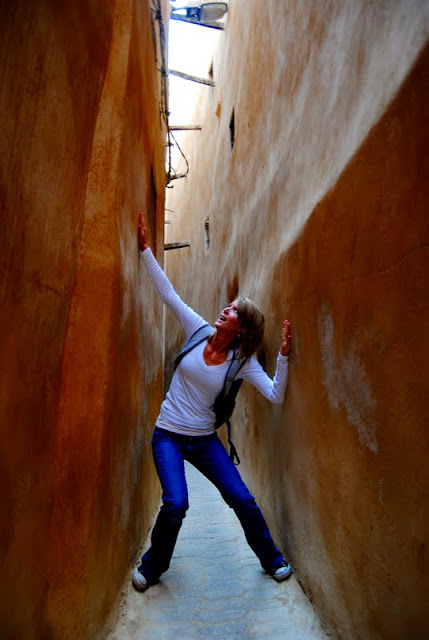 John and I were privileged to spend two full days here. One we spent exploring on our own and the other we spent buying up souvenirs, going on a guided tour, and drinking as much Moroccan tea as is humanly possible.

I know people are anti-guided tour, and usually I am too, but because Fez is so huge, so confusing, so busy, and every single alley looks the same, a guided tour will help get you to the best sights in town that you probably wouldn't be able to find on your own. The only downside to these tours is that they are designed to get you to spend money (and too much of it at that!) so be polite, say thank you, maybe even tip people for their presentation, but don't feel obligated to buy. 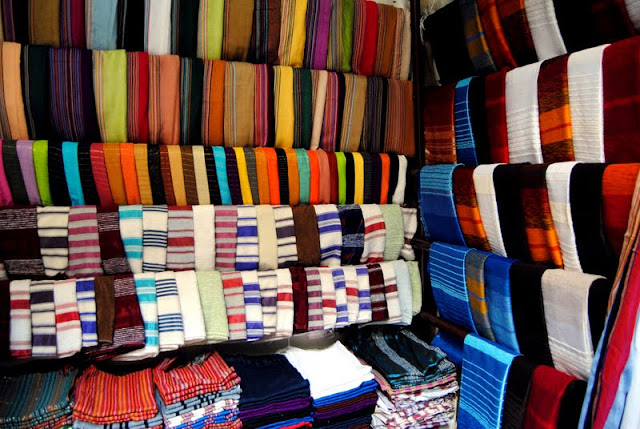 One of our stops on our guided tour was to a hand woven fabric store. As you can see they make beautiful scarves, blankets, and even duvets. Any guided tour will take you here, guaranteed. I did purchase here. The prices weren't that bad for what they were (hand dyed and woven). No bartering here...the price is the price.

﻿﻿
﻿
Another stop is the tannery. There are many in Fez, but this is the most famous. The prices are VERY steep here, I would buy in another city if you plan on traveling around Morocco a bit more to avoid the Fez mark-up. The tanneries are the largest in the world and smell absolutely disgusting. Part of the tanning process is to soak the skins in fermented pigeon poop, and it smells absolutely rancid. They leave sprigs of fresh mint around the railing to hold to your nose...this feels a bit snobby (in a "I'm so wealthy and can't stand the stench of those lesser" kind of way) but it can't be avoided, the smell will cue your gag reflex. 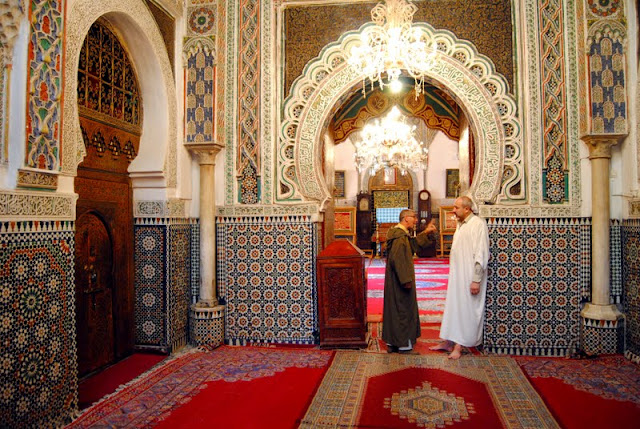 Many other stops were made, but one of my favorites were to the many mosques in Fez. Fez is known as the "Mecca of the West." As I mentioned, it is the cultural captial of Morocco, but what makes it so is that it is the spiritual center of the country. Here you will find the oldest mosques in the country, and some of the most grandiose.  We were allowed in, Morocco only allows Muslims into their mosques, but you can stand at the front and take a look inside.

As you speak with the locals you find that the people of Fez are very proud to be so. Their attitude is that of a Texan or a Saudi...they believe whole-heartedly that they are from the best place in the world! When you ask people in other Moroccan cities where they are from they might hold their chin high, their hand to their heart and proclaim, ever so loudly and proudly, that they are from "the beautiful city of Fez, the spiritual capital!!" 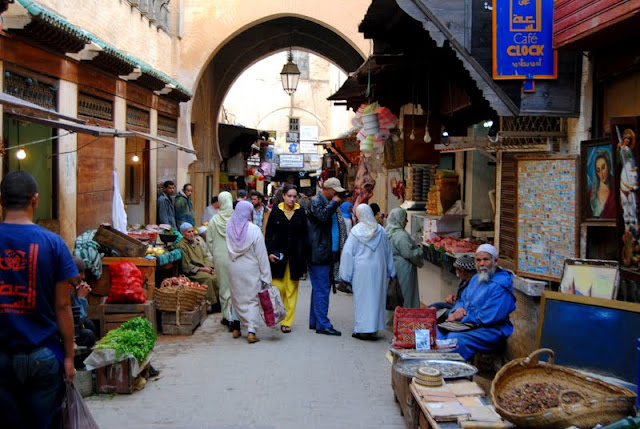 When you're not touring I recommend walking up and down the streets. There are two main "roads," the Talaa Kebira and Talaa Seghira. There is more than enough to see on these two roads and if you want to venture far off the beaten path just make sure you know those two street names so that people can point you back to them.

When bartering for souvenirs take it slow, build a relationship, and get to know the storekeeper. Stop for mint tea and some schwarma. One of my favorite memories was stopping in a (literal) hole in the wall where an old man was grilling up questionable meat. We decided it looked like an adventurous place to eat and squeazed in the five foot by five foot hole to sit at a wooden table with an absolutely ancient old Moroccan couple already eating their lunch. We sat down and made small talk. Very, very small talk in broken Moroccan Arabic and bits of French. The chef brought us mint tea served in glasses that I swear haven't seen soap in years and we sipped happily away. The old couple slid over their plate of meat and bread and insited we share with them until our food was ready. There we were, with people we had never met, sharing a meal and having a good laugh over...well, I'm not really sure...the inability to communicate, I suppose.

Question of the Day:
When you travel do you do guided tours?
What's your favorite "with the people" memory?
﻿
Posted by Hannah {Culture Connoisseur} at 9:51 AM