As mentioned in this post, John and I honeymooned in Spain and Morocco. Our few days in Rabat were some of our favorites out of the whole two weeks. Rabat just has something. There's an electricity about the city, the people's smiles are contagious and their surroundings are picturesque. I love Rabat because even though it's a big city (the capital of Morocco) it still has a small town feel and you can really relax and enjoy the culture there.

Rabat is a coastal city bordering the Atlantic Ocean. It has been the country's capital since 1912 when it was moved from Fez. The city is broken up into two worlds- the new city and the old medina. The newer side of the city has nice hotels, bus and train stations, and lots of places to shop. The streets are impeccable (compared to other Moroccan cities, and other parts of Rabat) and are lined with tall palm trees.

John and I walked through the new city, but spent most of our time in the medina and surrounding areas. Our hotel was inside the medina walls in a beautiful old dar (house) owned by a French woman. If you make your way to Rabat I highly recommend the Dar Zouhour and it's central location. See my review here. 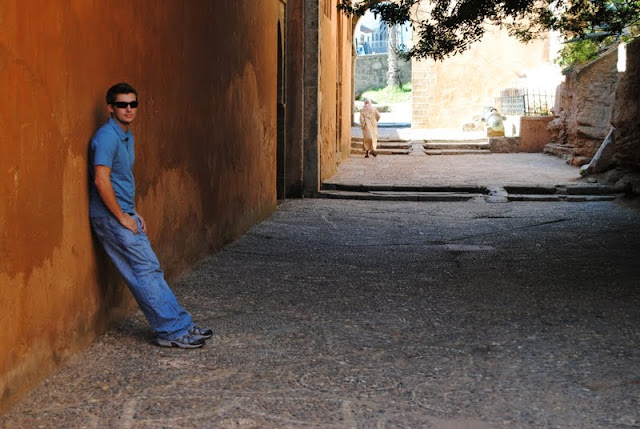 John and I spent much of our time checking out the major sights and exploring tiny alleys.The oudaias is a great place to do this. Just inside the kasbah walls is a beautiful neighborhood. The whole place is painted in stark white and vibrant blue. On a sunny day the color is almost too much to handle, it just pours happiness into your heart. This is a must see, and on your way out you can take a walk through the tranquil kasbah gardens.

Warning: Men stand at the entrance to the oudaias telling you that you aren't allowed in because prayers just finished up. That's a lie. Blow right past them as politely as possible, anyone is welcome in the city and you can walk in, prayers or no prayers, as long as you stay out of the mosques (generally speaking Morocco does not allow any non-Muslim to enter the mosque, but in some cases you can stand just outside to peak in at a particularly historic one.)

Another great sight to see is the medina and market (souk) at night. After dark, around 8 or 9pm head over to the souk and get lost in  the crowd. Moroccans love to be where the people are. If they go to the souk and it's not crowded they will go home until later when it's packed out. It is the place to be and it is full of new sights, sounds and smells. If you miss this, then you will have missed Morocco entirely.  Keep some cash in your front pocket for street food and hole in the wall restaurants. There's lots of great shopping around here, but bargain hard.

Lastly, but certainly not least-ly, make sure you take a walk over to Le Tour Hassan and the Mausoleum of King Mohammed V. The Tour (tower) is an unfinished minaret built by Almohad sultan Yacoub al-Mansour in 1195. It was intended to reach 60m (the tallest in the Muslim world), but only made it to 44. Even at it's current height, the tower impresses.

The beautiful mausoleum (not pictured) is the burial site of the late King Mohammed V, much loved by the country and visited by many throughout the year. It's a solemn place to visit, and it is great to see all the care put into the design work inside. 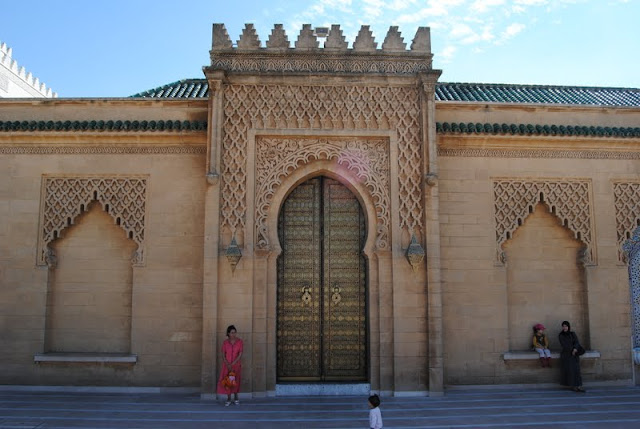 To the right of the mausoleum is a large and beautifully decorated mosque. Go visit this area near the time for one of the prayers so that you can stand in the square between Le Tour Hassan, the mausoleum, and the mosque when they sing the call to prayer from the loud speakers. We enjoyed watching the locals flock to the area and leave soon after prayers were finished-  culture happened right before our eyes!

Rabat holds a special place in our hearts and we talk about going back all the time. Even though we visited many beautiful cities in the country, Rabat stood out among them all!

Question of the Day:
What's your favorite sight that I saw?
Posted by Hannah {Culture Connoisseur} at 10:13 AM